Right around the time Kill la Kill came out, I told my circle of ani-watching friends that I planned to pick it up to watch, not really knowing what it was or who made it — just that I thought it looked interesting. Almost as a consensus (these were, like, four out of five people) they all said “You have to watch Gurren Lagann to really appreciate Kill la kill”. Now, these people knew a good bit of my history with the medium (and I them) to the point where we had a good grasp of who watched or didn’t watch whatever show; and they all knew that I haven’t watched (and had no plans whatsoever to watch) TTGL at the time. So I brushed off their comments and watched the first episode of Kill la Kill anyways. I got what they were getting at right away (in that both shows had that over-the-top feel to it) and I nary touched the series ever since (xD) BUT the sentiment did remain with me.

Why did I have to watch TTGL first to really appreciate Kill la Kill? Why do I have to watch some other show that came before to appreciate something else only vaguely and/or arbitrarily related to it now? Why should the way I view a series be influenced by something I should have seen first?

Of course, the simple answer is I nor anyone else is obligated to watch something because some authority in anime viewing experience told us so. Watch what you like, like what you like, and don’t let anyone tell you otherwise. I still maintain that one of the most beautiful things about this wonderful medium that we all love is that there’s most certainly  a show for every viewer, and every viewer their show — something I’ve only been able to succinctly put into words not too long ago.

That is to say, in as much as we all have our favorites, I do believe that shows simply just cater to a specific crowd; whether because of its genre or its overall style and presentation. There are niches for almost all fandoms (some deeper than others for sure) and in these niches there will always be one or two, maybe three titles, that a lot of anime fans will in agreement call “Gateway Anime” — shows that serve as a point of entry for people looking to get into anime. Often times we hear them as titles that are a “Must Watch” for any fan, which generally tend to be fairly good and popular shows with a lot of acclaim behind it, either by the show’s own merit (amazing story, stellar visuals) or its legacy in relation to the current anime viewing landscape. There’s a plethora of “Top-n Must Watch ____ Anime” lists out there in even the most mundane parts of the Internet so I think I can safely assume you have a good idea of what sort of titles I’m talking about.

I don’t really have much problem with this practice if at all, I mean, the more people who watch anime the better right? (xD) I do acknowledge the fact that there do exist certain shows that would appeal more towards an audience who aren’t really all that privy to the medium or would at least be more palatable to them. These “Must Watch” lists also help newer fans find which show they’d want to watch next once they start. Don’t get me wrong, I’m all for people giving out recommendations based on their own personal preferences and their perceptions on what other people might like (heck, I even have a series of posts that is exactly this, lol)

My real issue (if you could even call it that) is when fans start bringing up shows that “you should have already seen” as a current fan or even in cruder terms, a show that “you have to watch first to really appreciate X“ with X being whatever show that came after that bears similarity to the show (or shows) that now define its niche.

In a post I wrote a while back (three years ago to be exact) I talked about how we, as an audience, have become harder to please as of late. Specifically, I bring up how we’ve (in my opinion) become unappreciative of newer titles bearing similarities to older shows (either thematically or stylistically) by never-failing to compare the former to the latter. I used Yuuki Yuuna was Yuusha de Aru to illustrate my point wherein most fans near-immediately painted “YuuYuuYuu” as a “Madoka knock-off” in direct reference of course to the massive fan-favorite Mahou Shoujo Madoka Magica; a title that many look to as that which “re-invented” the magical girl genre and as such is still treated to this day as a contemporary milestone for anime. 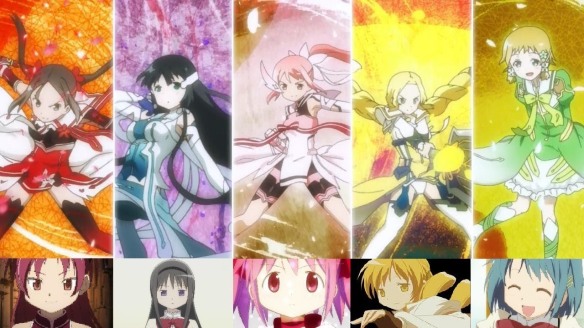 It wouldn’t take much to see that this culture of comparison has not changed much since then. To this day people still see shows like YuuYuuYuu, as well as the more recent Mahou Shoujo Site for example, as shows that pay homage to Madoka in one way or another — much in the same vein as my earlier anecdote on Kill la Kill with Gurren Lagann. Other examples include; cult-classic Neon Genesis Evangelion‘s influence on the mecha genre for shows like RahXephon and Darling in the FranXX (which ended its run not too long ago); and to a lesser extent the supposed impact that Shoujo Kakumei Utena had in inspiring Star Driver and (the recently concluded) Shoujo Kageki Revue Starlight.

But Leap, why is that such an issue? Well, on the one hand, it’s really not (lol) since one can just disregard these remarks altogether and go about with their anime viewing. However, for the sake of discussion, let’s unravel this little knot of inquiry a bit further. Not to ignite some sort of feud between those that do partake of this practice, but for me to at least expound and better shape my stance on the matter so as to NOT bring about dispute (as the last thing I want to do here is attack someone and their views)

Now, to clarify, my gripe is not about people comparing anime shows to one another nor is it about the culture of comparison we have as a whole. I mean, I do it half the time when I talk about Japanese music for my Monthly Recommendation Round-Up series so it’d be hypocritical on my part to condemn something that I actively do. See, I don’t think that the act of comparing one thing to another is bad. It’s human nature to compare. At a base-evolutionary level it is one of the foundations of our survival as a species (by being able to determine whether or not something is beneficial or dangerous by comparing the experiences we’ve had with different external stimuli). In the context of anime viewing, we generally do comparisons to aid in describing shows, by using more well-known and/or relatable titles as points of reference.

My concern is when comparison is used to censure, dismiss, and discredit both anime and one’s anime viewing experience by virtue of not having seen X — with X again being these landmark shows that have now become nigh synonymous with its genre. “All Magical Girl shows nowadays are trying to be Madoka with their dark themes lol”, “You have to watch Madoka to understand that they’re just copying it”, “This is just a clone of Eva”, “Evangelion did that first”, or as was with me and my friends “You have to watch Gurren Lagann to appreciate [this]”. 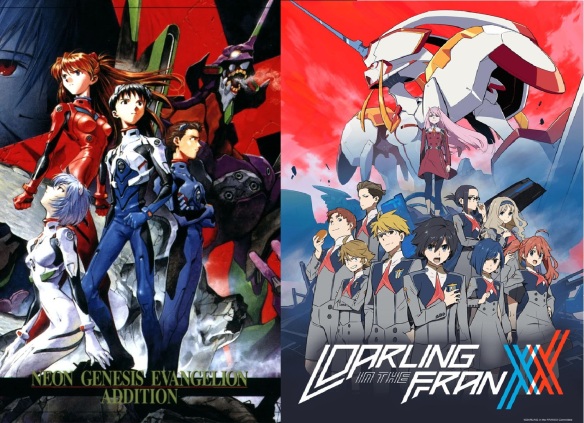 There’s a lot to this, possibly more than what was intended to be said, but comments made such as these (intentional or not) does bring to light a sort of stubbornness if not an outright shortsightedness that is had by some towards anime. The idea that a show that happens to share a similar theme and style with something that succeeded immensely prior is just taking its cues from it. That those that appreciate the former are actually unfounded in their appreciation if they do not know the many nuances offered by the latter, as if in an effort to say that particular anime can only be good because of this other anime that did it first/better.

If you think about it, comparisons such as these aren’t that much of a far cry from the fandom’s long-standing problem with elitism, if not directly pursuant of it. It is an over-romanticization of the “Must Watch”, from simply being shows that people should see to shows that people must see, for them to have any sort of valid discernment for what’s good or not. It is an imposition of standards on the viewer’s value systems, the basis of which being whether or not we “understood” that certain shows are just trying to do what X did, and that their success is in large part of and can be wholly attributed to X.

I mean, does one not diminish the value of something by saying it is a mere imitation of an original? But what of the old adage, imitation is the highest form of flattery? Well, yeah, it’s pretty cool if a show purposely pay homage to a predecessor… if that was truly the case. More often than not, people make these connections between shows of their own accord, as opposed to something acknowledged by a show’s creators — thereby robbing any sort of creative merit from the anime and the ones responsible for it. In putting X up on a pedestal, any show that bears even the barest amount of similarity to it will always be subject to comparison, despite the show’s creators possibly not even intending for it to be similar to X at all.

I say “possibly” here because it’s hard to say off the cuff whether creators are actually basing their works off of more prominent ones, and is really the only thing that allows for the benefit of the doubt. I actually think it’s fairly arrogant for fans to assume that creators are mimicking what works and what’s popular, but I digress. I’m not dismissing the fact that certain anime have influenced shows that came after it, but I am also of the mind that ideas are bound to be repeated the further along anime continues to be. In as much as the bounds of the human imagination are limitless, so too the potential of the exact same thought occurring for two, three, or a multitude of people. 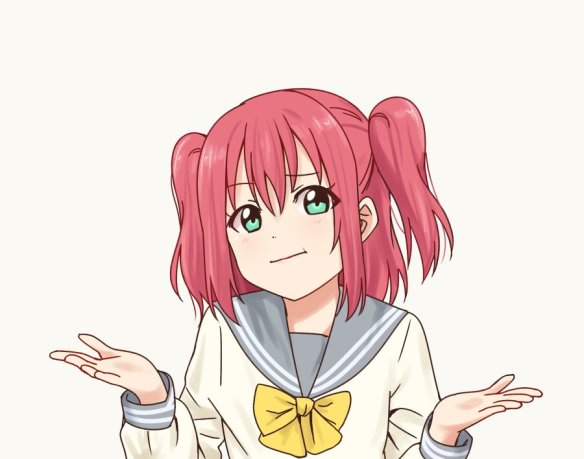 SO, to conclude, I am not saying that the culture of comparison that we have as fans is inherently bad. It is only when these comparisons serve only to dictate one’s anime viewing experience while also intrinsically devaluing a show is what I find disagreeable.

I’m not gonna end on me telling people what to do as that was not my intention from when I started writing this post nor is it now after the fact and, if that’s what you got out of this then rest assured, I’ll be the first to take a shot at my own writing in failing to get my point across. This isn’t about righting some intangible wrong within anime fandom but rather me just concretizing and putting into words something that may or may not have irked people at one point in time as it did me in my own experience with the medium. Is this over-sensitivity? Extreme hipster-ism? A knee-jerk reaction blown out of proportion? Perhaps. Again, one need only to not think too much about what other people are saying for this to not be a thing (xD). But I also believe that discourse (healthy ones that is) is important to have from time to time.

What are your thoughts on comparisons when talking about anime?
Lemme know in the comments below~