Hello everybody and welcome once again to the 2018 Anime Seasonals — The Winter Games! We are in Week 06, and boy oh boy, we have ourselves a game ladies and gents!

It’s against the law to drink and drive at the same time…but that doesn’t matter for Irina as she absolutely tramples us under her feet with a dominant 25-point lead as per last week’s tally. She’s been saying all along that she’s gonna mop the floor with us, and while it took a while for the buzz to kick in, she’s now making good on her claims. It’s not illegal to drink and watch anime, but Irina’s total curbstomp-ing of us is for sure criminal (jk, hope you win :D)

TPAB nabs a thin second place with 19 points, perhaps the pants tripped him up last week. He’s tasted first place not too long ago, and I doubt he forgets the feeling. AstralGemini and myself (Leap) aren’t that far behind with 18 points a pop. While I’m relieved we’re sharing last place with someone, I’m not at all comfortable sharing it with The Zodiac Room’s proprietor, who’s been nothing but steady in his run thus far.

We’re slipping — hard (>,<). But we’re also neck-and-neck with these awesome individuals, so that alone is already a feather in our caps I’d say. It’s the halfway mark, and this is where we find out whether we sink or swim under the pressure!

Laid-Back Camp
(Yuru Camp)
Episode 06
tl;dr: “PSA: When asked by an old dude who’s camping in the middle of the woods whether or not you want meat — please think twice before accepting.
Also yey more Onee-chan~“ 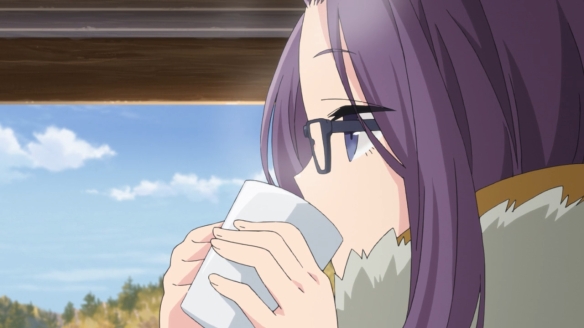 She’s just such a cool character — and they even reference how nice she’s been up to this point. Turns out she goes along with Nadeshiko’s whims of going to different camp grounds because she “likes to drive”. I don’t blame her. Everywhere they’ve been was a visual treat, so I reckon even the normal roads leading up to the mountains must seem like quite the scenic route. And c’mon, who woulnd’t like a nice hot cup of tea in a place like this?? But I’m jumping the gun a bit; Episode 06 of Yuru Camp is in the record books, and wow, I can’t predict anything about this show to save my life (xD)

Of course, I don’t mean that to say that the show’s “unpredictable” or anything of the sort, but I’m just terrible at reading certain cues. For instance, I completely forgot about the souvenir bit with Rin until it got brought up again in the opening minutes (and I even gave that scene a compliment for showing Rin’s character development! chikushou!). Virtually both of my predictions for last week was rendered null just by this exchange alone as (1) Rin’s hair was already fixed, and (2) it looks like she already talked to Saitou about her trip so we didn’t get a scene like before of Rin showing Saitou her camp pics. What we do get is a hilarious exchange between the two regarding a certain travel-size griller (these two are just adorable :3)

Surprise, surprise; we set out camping yet again! I actually had a good laugh when Rin talked about exams coming up as I did jokingly allude to their academics apparently being not much of a concern a couple of weeks back. But yeah no, camp is life. As a result of this philosophy, Nadeshiko and Rin embark on yet another duo camp experience. I’m proud of our little blue-haired blob finally breaking out of her shell a bit — almost initiating the whole thing (ah, the ‘ol extrovert-introvert dynamic). We get a nice little shopping scene that just so happens to be the place where Aoi works so we get some unexpected interaction between Rin and a girl that’s not Nadeshiko or Saitou. I mean, it was a brief exchange that didn’t really amount to much, but at least it was there. 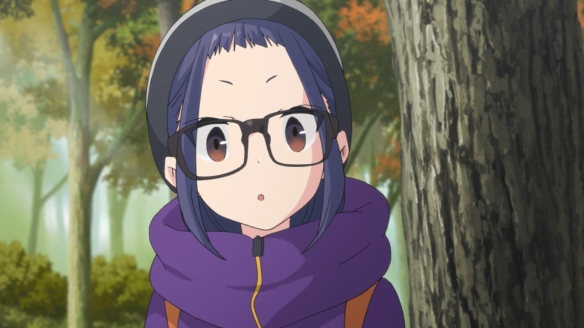 There’s also a side-plot of sorts with Chiaki scoping out a potential camp site for the OutClub (wait, did you just call out Nadeshiko for going camping back-to-back a little while ago?). It doesn’t look like the same place, but I’m not too sure (and how about that old camper eh? xD). Then again it wouldn’t make much sense if she’s looking to camp there with the OutClub if Nadeshiko and Rin have already gone there, so I’m working under the assumption that it’s a different place altogether. I like the nod to the Five Lakes (which I mentioned in Week 1-2 as being a possibility) so yeah, might end up being another place from there.

>> Predictions
~ An inanimate object talks (action)
~ Nadeshiko and Rin mistake a camper for a ghost — who then proceeds to give them barbecue; specifically the meats they weren’t able to get from the supermarket (plot)

Record of Grancrest War
(Grancrest Senki)
Episode 06
tl;dr: “Theo is so not ‘just a guard’“ 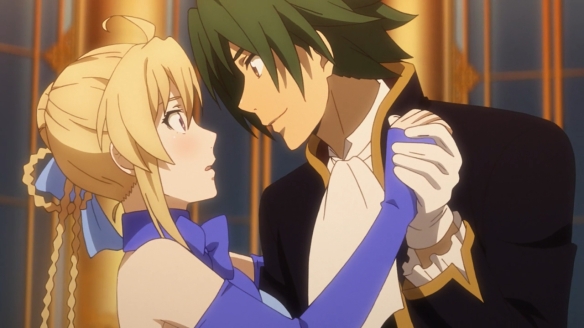 I thought that was a bit weird. I mean, Villar does explain why he wants to bring Theo along to his meeting with the other Lords and whatnot, but Villar himself gave the stipulation that Theo was to hold the fort if he happened to be away for business — which would be this very scenario. Then again, it’s not like he cares much for Theo anyway so our boy is pretty much free to do as he wants. Villar is only interested in Siluca anyways… but not exactly in the way we all thought (or at least not me). Episode 06 is here, and things are moving fast; almost as fast as that one dude’s horse! 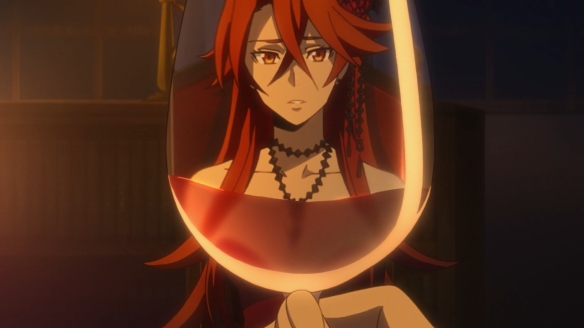 That dude, of course, is one-man-army (and increasingly becoming my new favorite character) Lord Milza. But I’m getting ahead of myself. A bit of a side-arc resolves in the Villar estate as Margaret turns 25. We found out in an earlier episode that Villar sends away his mages once they reach that age, not because he thinks them too old, but because he wants them to be able to live their life still. This episode further ups the ante in making Villar more likeable as we find out why he’s fixated on his mother. All this Villar positivity is worrying. Death flag perhaps? Too early to say, but if I’m reading things right (my predictions say I haven’t), he’s close.

Speaking of close, we finally get some light-hearted fun with Margaret’s birthday banquet; sporting a quite jerkily animated dance sequence between Villar and Margaret as a sort-of highlight (we also get a bit of Theo!Siluca action, but, meh). This is where you kinda see where the show is allocating it’s animation expenditure, because only mere moments after this fiasco we get (in contrast) a really fluid fight scene between Theo and Lord Milza. Now, I’m not entirely sure as to why these two decided to throw down. I guess vaguely it’s a bravado thing owing to how Milza likes to go on about how Theo is a weak lord for not “having ambition”, but I dunno, the whole thing seemed so random.

At any rate, bad blood continues to boil between the two, but none of it yet spilling over as they are still technically allies. The gathering of the lords of Artuk commences and, whaddaya know, we go to war ladies and gents! The group come up with a plan to conquer more territories tied to the Alliance and everyone gets an assignment — except Milza who unilaterally decides to raid a castle by himself. Which is whatever dude be a badass it’s cool but he literally gets there in the next couple of frames and I’m like, are they just really close or is that horse super friggin’ fast! (xD). Bloodbath ensues (as we’re treated to some nice 1-vs-many combat) and now we wait for Theo to deal with things a bit more.. cleanly, in the next episode.

Sanrio Boys
(Sanrio Danshi)
Episode 06
tl;dr: “Title drop!
…Though I guess we already kinda had one in the first episode.“

We made it ladies and gents — after six (count ’em, six!) introductory episodes, we now have our complete set of Sanrio Boys. Looking back it’s funny how they set this up, more so because it mirrors the progression of idol anime and/or “cute girls doing cute things” shows (trust me, there’s a difference) almost to a T. First you gather up the cast one episode at a time, then once we’re done with that, we get down to business. But before we get to do that, let’s take a final look at the conclusion of last episode’s arc, which I choose to now dub as; Ore no Senpai wa Konnano Sanrio ga Suki Wake Ga Nai. 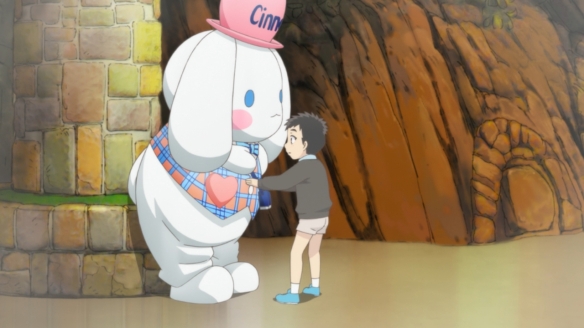 Okay, okay. I said last week that this was an arc that I could get behind and honest to Hello Kitty I really did try. The episode picks up from where we left, with Ryo scampering away as he finds out that straight-laced Prez Seiichiro is one of them/also into cute things — with Cinnamorrol being his Sanrio of choice. To be honest, while I did flub my prediction as to why exactly he likes that particular mascot, I’m almost glad that it’s not something dramatic as with how it is for the rest of the guys. He just had a moment with it when he was a kid and it just.. stuck with him (xD). I guess, the way he uses PuroLand as a sort of PokeCenter for himself is more or less his quirk, but even then that’s sort of pretty normal. 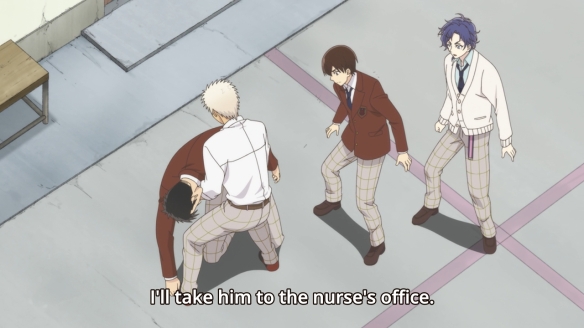 Prez worries himself into complete exhaustion, even going as far as to show up at Ryo’s house just to apologize, despite having done anything that you could call wrong. More than that, the guy’s a total Gary Sue (with a bit of a stamina problem). Nevertheless he bears the brunt of Ryo’s frustration because he’s such a caring Prez and one troubled student is just one too many. Kouta finally does a bit of leg-work this episode (he’s actually been pretty lackadaisical as far as MCs are concerned) by guilt-tripping Ryo into checking up on Prez. He eventually caves and the two make up, all the while admitting that he does in fact like cute things (…..what were they fighting about again?)

So, all five Sanrio Boys have gathered — now all that’s left is for them to do.. something as a group. We already know they’re gonna do a play for the culture festival so I don’t think any of us are gonna throw that out there as a prediction. So the question really is gonna be, how the heck do we get to that kind of development??

Is this as far as we go? Or do we get our second wind? Tune in to find out!

And if you haven’t yet, drop by these guys’ posts to witness their winning ways.