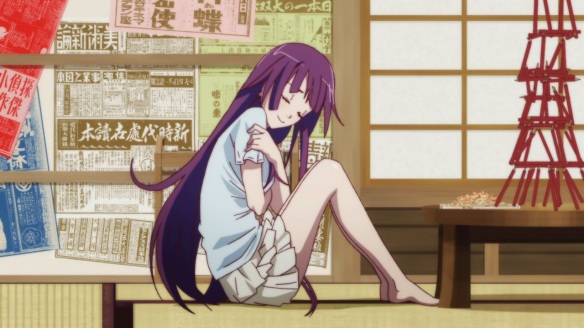 Likely so, but fortunately, Senjougahara has something else in mind in terms of vengeance. Six episodes strong is Nisemonogatari with some pretty interesting developments.

I guess the kiss (mentioned last episode) worked, somewhat, as Karen’s fever dropped a bit. Apparently the “poison” Koyomi took from Karen wasn’t enough. The poison is kept at bay by Koyomi’s vampire healing abilities so he appears virtually unharmed. Personally, I guess it was a good move that they didn’t make a big deal about that scene (who knows, maybe SHAFT is saving something else) I feared incest there for a second. 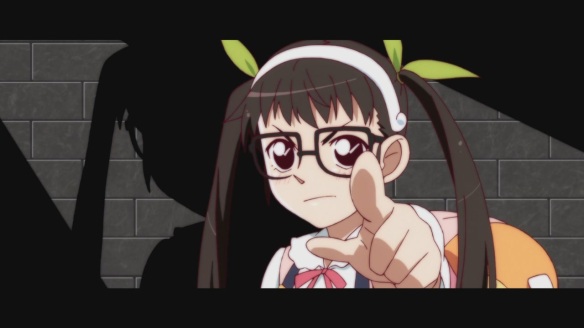 We also see Hachikuji again this episode, sans the sexual harassment, much to the comedic dismay of, surprisingly, Hachikuji herself. Jokingly, she says that she acts to dislike what Koyomi does to her so that he’d do it more. The dialogue here may be in jest, but I think there’s more to it, which I’ll talk about later on.

Koyomi explains the situation so far to Hachikuji, which then moves to a sort of continuation to Koyomi’s mini-monologue in the first episode. The discussion was his sisters, and how they need to act grown up. What Hachikuji says here is basically, they’re (Karen and Tsukihi) still kids, so it’s better if they act like kids, even if they don’t realize it, rather than an adult, who doesn’t realize he/she is an adult. It’s true that anyone can “grow up” by aging, but Karen and Tsukihi are just middle schoolers, asking them to grow up may not be so easy as Koyomi thinks it is.

The two part ways just as they reached Senjougahara’s house – if you’d remember the events of Bakemonogatari, Senjougahara doesn’t take too lightly on the fact that Hachikuji is there, even if she can’t see her. Koyomi says something intriguing here about how he doesn’t know what will happen to Hachikuji, but maybe he means just what he says.

The following scene has Senjougahara “arming” herself by sharpening what appears to be Unlimited Pencil Works. She’s planning to take on Kaiki, or rather, that was her plan all along once Kaiki had come to the town. Her wanting to protect Koyomi was just an “excuse”, or so she says. She was just “tsundere-ing” (which feels a bit similar to what Hachikuji did earlier on) Koyomi, being the man that he is, professes his love once again and shows his resolve to go with her to Kaiki. Senjougahara agree under one condition, though she doesn’t say what, and Koyomi has to agree to do it. 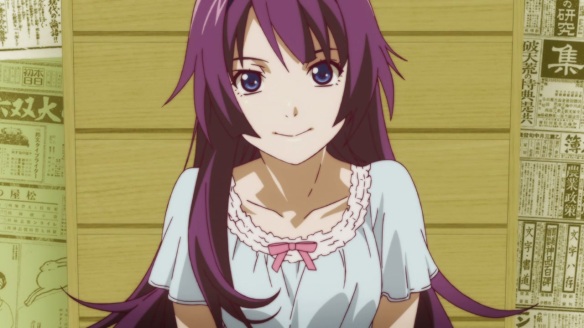 Oh, and apparently, Senjougahara calls Hanekawa as Hanekawa-sama, and she polishes her shoes and kneels before her because she wants to, not because she’s being bullied or threatened. What has happened to our Senjougahara!? 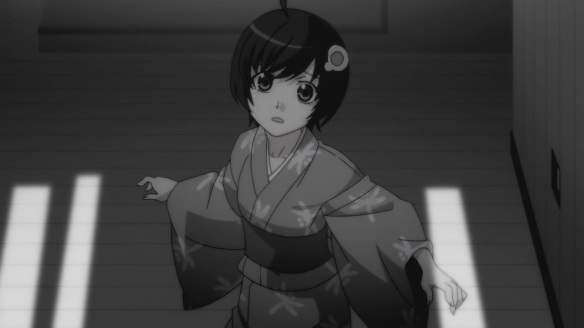 Afterwards, Karen goes missing (stubborn girl is stubborn) Koyomi’s first assumption is that she’d go somewhere where he can’t find her, then proceed to look for Kaiki. Rattling his brain for possible places where Karen might’ve gone, he rattles Shinobu as well. Since they’re connected, Shinobu says she feels Koyomi’s panic as well, and it messes with her nap time.

Koyomi asks if Shinobu would help him, to which she answers that if he “orders” it, she’d have no choice but to follow. Of course, Koyomi doesn’t want to just order around Shinobu to do as he pleases. Shinobu follows it up by saying that the mere fact that she appeared before him and not snoozing instead is that she wants to help him (aww) and that calling it an order would help her save face. The episode ends with Shinobu sniffing out Karen’s blood, and finds that she isn’t as far off as Koyomi thought.

The final dialogue with Shinobu mirrors Koyomi’s conversation with Senjougahara (and to some extent Hachikuji) in that, I think, false reluctance (tsundere-ing) is something of a minor theme. So yeah, halfway through (technically more than halfway) and the Karen Bee arc is climaxing.